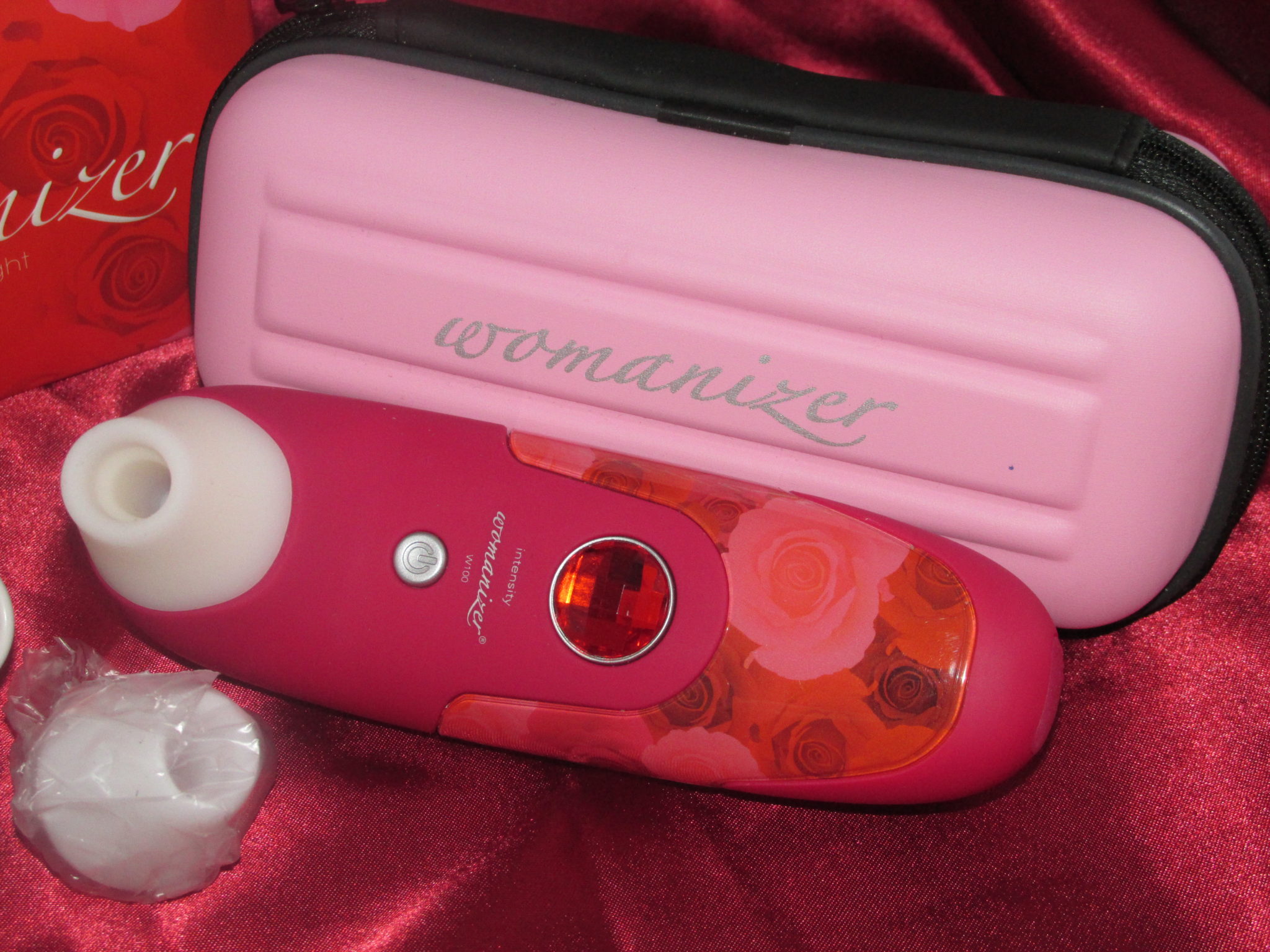 Initially I was excited to receive this item, I’d heard so many great things about it – I’d read reviews where people had orgasms within seconds. I was thrilled, people whom I know to be power queens hailed the Womanizer.

I looked at it for a while, since it looks so strange, I mean it looks like some warped breed between an ear thermometer and a lady shave; and well the colour and patterned scheme is horrendous, I really dislike the look of this thing, and I received one of the nicer looking ones (at the time of writing this). I really don’t understand the thought process that went in to designing this, it’s like they got someone in; and said ‘name three things women like?’ and their reply was ‘Oh, Pink, Animals and  Jewels’ and from that this thing was created. I was assured by others that once I try it; I will no longer care what it looked it.

It just seemed to come from nowhere, this strange looking toy making people squirm with pleasure, I wanted to try it and see what all the fuss was about. I emailed Womanizer and asked them to send me this item to review.

I was quite surprised by the packaging, the way this thing is designed I was expecting the packaging to look awful and somewhat tasteless, but it exceeded my expectations. The Womanizer also comes complete with a handy little storage case which is great, however I really wish that ‘Womanizer’ wasn’t wrote on the top of it, it’s not really all that discreet if left out.

How to charge The womanizer

It comes with a USB charger, and it took about 4hours to fully charge; once charged I ran upstairs in a bid to put this thing through its paces, lubed up and ready to go I turned it on. It makes the strangest chugging noise, reminds me of an old train for some reason.

At first it felt quite nice, it was a strange sensation; I didn’t really notice any form of ‘sucking’ nor did I feel any form of vibrations at all; for some reason it felt like a cold air was being blown on my clit – I’m really not sure how else to describe it – I was more than ready to increase the speed, so pressing the over sized fake jewel made the chugging go a bit faster, and I became more aware of the cold air blowing on me; after laying there for what seemed like hours, but was probably minutes; I was already bored, and the cold air blowing on me seemed to get colder, and more biting. I decided to hurry this along and increased the speed to its highest setting, initially it felt great; there was an O, an Ah and at one point even an OMG, it felt amazing. it however didn’t feel amazing for long, probably a second maybe two and then I felt irritated, annoyed and frustrated. Putting it back on the lowest speed it felt nice again, only to again feel irritating within seconds. I had to constantly increase and decrease the speed to stop it from irritating me. I’ve tried different methods of using it; putting it on my clit, holding it over my clit, keeping it perfectly still, slightly moving it; no matter what I did, the outcome remained the same. The cold sensation that I originally felt at first felt mild, but with prolonged use it just seemed to feel like a biting cold, that actually hurt!

This is my experience with the Womanizer, this is every experience I’ve had with the Womanizer; It just does not seem to work for me at all, it irritates me! I’ve tried this thing more times than I can count on both hands and every single time I tried it, I didn’t even manage any form of orgasm. I was so frustrated that each and every-time, I’d want to throw the thing at the wall (I didn’t) – I’d pull out my trusted Tango or my Doxy and continue with the session – every time I used the Womanizer prior to using my Doxy or Tango it took me in excess of 30 minutes to achieve a single orgasm – that doesn’t happen to me, never once had it taken me longer than 10 minutes, let alone 30 minutes to come with one of these two toys UNLESS I use the Womanizer first. It’s like it de-sensitized my clit.

I was convinced my clit was broken; it was taking me so long to reach orgasm that I literally fell asleep at one point with the Tango still pressed against my clit! I’d never had to work so hard for an orgasm before.

This item was sent to me in exchange for an honest review from Womanizer.