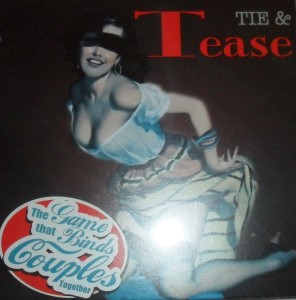 April 26, 2019September 23, 2019
by BBG Toys
in Reviews
Comments Off on Tie and Tease Adult Board game – The Game that Binds Couples Together Review

I was approached by Tease and asked if I wanted to play their fresh game, I had initially reviewed the Tease game for couples and organizations when it was first published and had liked playing the game to say yes to it.

Inside the box you will find a blindfold, a satin ribbon, 2 dice one with numbers on it and one marked Dom / Sub and the playing pieces 2 male and 2 female, although you get the 4 pieces this game is really aimed at couples but as the pieces are male and female having 2 of each means you don’t ignore the same sex couples out there who will also get a kick out of this game. There’s the board as well as the guidelines.

The board is marked to show where the different cards are to be placed and where you start / end the game, and every square you land on will cause you to choose a card and perform some sort of a senario, either from the Dom(me) or from the Sub, depending on how much time you have and how much you enjoy playing the game, the instructions tell you to go around the board. We really liked you could choose the game length and there’s nothing to say you can’t just keep going round until you run out of cards if you want.

With this match, there are a lot of cards and the come packed together in one big stack. Personally, I feel the packaging could be slightly improved to allow the cards to be stored inside the box when they aren’t used to prevent them from getting mixed up and messy, maybe that’s my OCD though I like it all.

Below is information about each of the different cards and I’ve taken photos of a selection of them so you should be able to read the scenario and get a feel for the game from them, I usually don’t create my pictures that big but for the advantage of individuals with bad eyes I’ve enlarged them a bit. You will see that all the cards apart from the final D / s cards are split into D and s, the idea is that you decide who will be in which role before you start playing, for some couples it will be pretty much decided for others they may need to play the dice or discuss it. You can then choose to stay for the entire game in that role or to role the D / s die every time you turn and use that to decide for you. The cards are also divided into two levels one for beginners or for when you’re at the beginning of the game and the second for more sophisticated play, I personally feel that although in particular they’ve got this right for me, some of them are twice and vice versa, so that’s why I’d advise you to read all the cards before your first match and remove any cards you’re not pleased with.

1. Role Play will involve playing out some role play scenarios according to the guidelines, these have a image of a police woman in the 50’s style on them. Some of these situations have made me laugh, some of them have made me wince a little that they sound like corny but others are really nice, you can go through the cards before the match and bring out any that you’re not pleased to do or just leave it to destiny. Below is an instance of a level 1 and level 2 card, now I feel they’ve got these levels round the incorrect way as I’d find the 2nd card situation more pleasant to behave out than that on the level one card. On these cards, some of the other stuff involved being a worker in a sex toy store and being a hitchhiker.

2. Sensory that will require blindfolding and distinct sensations on the skin according to the guidelines. These ones have the image of the blindfold on them, including using stuff like ice and feather or spanking tools to generate distinct sensations, I believed these were really nice and there was a lot of variation in these cards.

3. SEX cards that are suggested as per the instructions, and these cards merely have the word SEX on them, erotic or sexual. I’m really struggling with a game telling me to do some sexual acts and even though I’ve been with my partner for almost 15 years (yes really) I haven’t been completely comfortable with all of them. That said all the things on the cards where stuff we had accomplished in the past as a pair and none of them was particularly shocking, the level one cards seem to be mostly about stripping and removing clothing products where the level 2 cards seem to be mostly about oral sex / pleasures. For me, the stripping with which I was most uncomfortable wasn’t the oral sex.

4. Impact that will require some kind of spanking or the use of other striking tools according to the guidelines, this is the part that I believe some individuals might be struggling with if they’re not playing in impact. They’ve got a whip image on them. It’s a true pity you’re not getting any kind of spanking tool with the game, particularly as you get a blindfold for the sensory cards and a tie for the bondage ones. I discovered these to tell you how many times to do it and where to use tools like a hairbrush or belt others just a hand at a nice level. I really appreciate playing this kind of game so these cards seemed right up to my road and the levels on the cards.

5. Contract that according to the instructions is about the types of agreements that are made in a D / s relationship, to be completely honest, I’m not sure that they need to be included in the game as such as most people playing the game will do it for fun, not for lifestyle, but they’re interesting and add something to the game. There are a few random ones in there, one where you have to get meals for the Dom(me) and another where the Dom(me) has to check the sub-pubic region to see if they’re well groomed enough for them, but other things like selecting a Dom(me) title and a sub pet name are quite enjoyable.

6. Bondage that will require some mild type of restraint according to the guidelines. Not everyone is comfortable with restraint, but I love it so I welcomed this section and believe that without it this game wouldn’t have worked. The cards have a red / white tie image on them, maybe a slight nod to 50shades? Or perhaps just the developers ‘ football team’s colors? Who understands that?

And finally the final square is the D / s square where the D / s cards are placed, you choose four of them and finally the person acting as the Dom(me) gets to choose which one is acting out. As this signals the end of the match the concept is that these are longer situations that could lead to a bit more, there are some fun things in there, below is a photo with a choice of them, even a blank one for you to make up your own if you want. I believe it’s a good idea to closely select these cards before you begin the game, but to make the final choice at the end of the match, but remember whoever is the Dom(me) always receives the final choice.

As I sat and read through all the cards, I noted all the stuff that the cards suggest you might need to be able to take action on the specific situations and those where

Now if you don’t have all of these things its not going to make playing the game impossible and things such as the belt, hairbrush and wooden spoon can easily be part of the 5 spanking implements as could your hand, Nipple clamps can be replaced easily with clothes pegs but massage candles should not be replaced with ordinary candles as they burn at a different temperature and you might burn yourself if you do.

It does say in the instructions that before you start the game, you should collect a collection of things that can be used in the game like those listed above, but I think it might have been nice for Tease to include a small flogger or paddle in the game, especially as a large part of the game is about impact play, but because they don’t have a hairbrush or a wooden spoon, they create a great game.

The blindfold and the silky tie are included in the match. The tie is of a good length and is readily long enough to be used as a wrist or ankle tie, as it’s satin it’s smooth to the contact but you should avoid binding any knots to tightly with it as they might become hard to untie and that’s why the game makers say they maintain some safety scissors handy.

The blindfold is really good, most of the time when you get blindfolds included in games or with free toys they’re pretty naff but this one has a piece of nose that prevents the light from coming in from below and a double elastic strap to maintain it nice and safe.

Overall, I think this game has its good and bad points, not all of the scenarios suited us as a couple, but a game like this will always be the case, and the good thing is that you can remove any that you really don’t like and maintain the game fun. I enjoyed the spanking / bondage and sensory cards and thought they really fit the game, the sex cards a repetitive with only 2 or 3 distinct situations, worded differently and the contract section is something that’s a bit hit and missing. I really like the game’s play parts and retro design and discovered the directions very clear and simple to comprehend meaning we could unpack the game and play it very fast. The only negative I could really find is that there is no spanking implement included, other than having a lot of fun playing this game and thinking it would be ideal for both new to bdsm individuals and those more accustomed to doing something enjoyable to add a little variety to their play.

Tie and Tease are presently accessible from a number of UK stores, including Lovehoney.