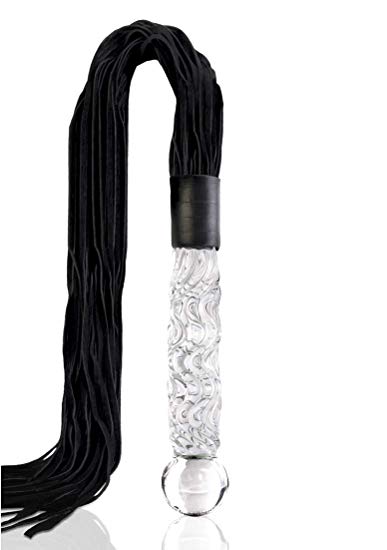 It comes in some beautiful tasteful packaging, with some really nice artistic pictures of the flogger on it, but you’re not going to spend too much time looking at the box, you’re just going to want to get that beauty out of the box and give it a swing.

The fleece part of the whip is lovely soft suede and has some fantastic weight to it, it feels soft and warm to the touch, I’ve read a few reviews of this fleece that says the suede sheds a bit when new, but with this fleece I haven’t noticed this issue.

The handle of Glass feels beautiful in the hand it has a great weight to it, the kind you just don’t get with any other stuff.

The toy’s glass part is nice and easy to clean, you can clean it in soap and water or use any sex toy cleaner to make sure it’s hygienically cleaned, unlike other glass dildo’s that can be placed in the dishwasher as this has the leather flogger attached to it. Glass is also secure to use with any lubricant of your choice. However, in this case, I would always suggest using a water-based lube because it is simpler to wash and less likely to harm any suede.

I’m not supposed to tell this, but…. Do not submerge the suede in water you are going to ruin it