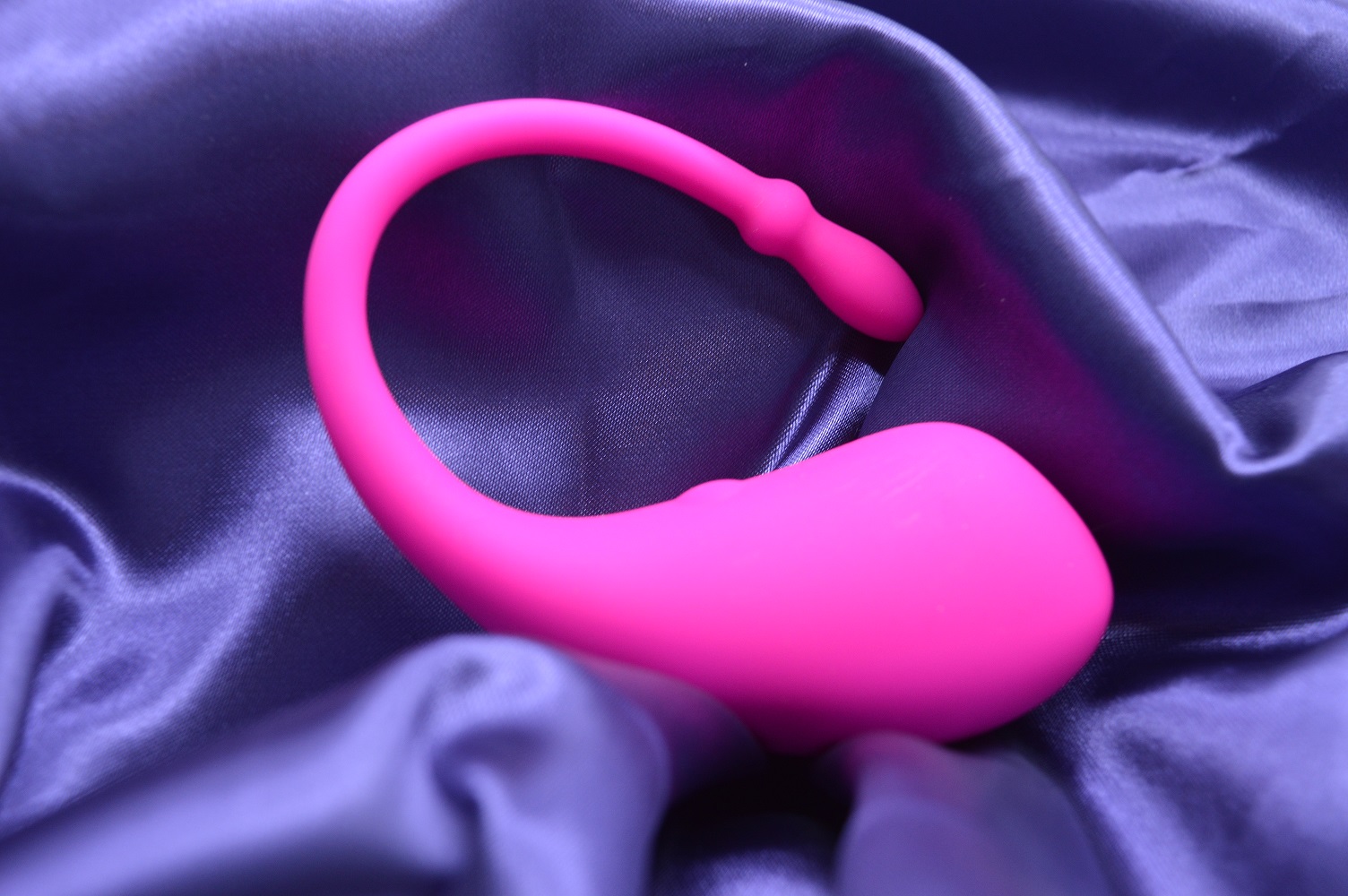 Most of this post is with regards to the original Lovense Lush.  It has since been updated to the Lush 2.  I’ve kept this article mostly the same but updated where necessary throughout the post for the Lush 2 so that you can get a good feel for what the Lush used to be like, and what it’s like now.  Spoiler alert – the Lush 2 is a big improvement on the first gen Lush.

The Lush might be on sale at the moment – 2019, check out the official Lovense site to check.

The information that I had seen about this was that it, apparently, had strong rumbling vibrations, that it’s rechargeable, that it had unlimited vibrational options and was waterproof. It sounded pretty damn good, so I was understandably excited to give it a try.

The Lush vibe comes securely packaged in a cardboard box. The box is incredibly sturdy so it can double as a storage box. However, it’s not overly discreet. The packaging is crammed with information about the vibrator. I’m actually amazed at how much information is on the box without it looking cluttered. Somehow, it actually manages to look rather clean. Inside the box, you’ll find the USB charging wire, the Lush and an information booklet. Tragically, it doesn’t come with a storage bag. Storage bags are one of those things that I feel all sex toys should come with. Thankfully, though, you can just pick one up separately easily enough, if you need somewhere discreet to store your toy. 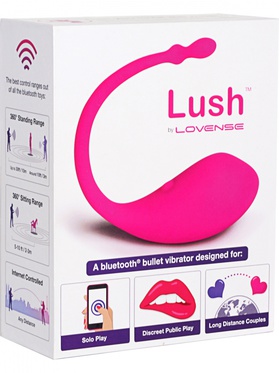 A lovely sturdy box to keep your toy secure when not in use.

You can see below the difference between the 1st gen and the 2nd gen.

Why I wanted the toy

The first thing I noticed when setting this up, was in downloading the application. You’re not able to just search for Lovense, because if you do , ALL THE THINGS will be found – and, notably, none of those things will be the thing you’re looking for! Instead you must search for Lovense Wearables. I’ll admit, that when I first looked at the user rating score of 3.8, I had a mixed reaction. Part of me was happy that  the application had a higher score than the OhMiBod fail that I’d previously used; the other part was a little sad that its score wasn’t higher than a 4. But then, I read the reviews, and I was really happy to see that replies had been made to several of the reviews asking for feedback of their issues. This made me incredibly happy as, to me, it shows that the company is interested in making their app better.

So my side of the connection was pretty damn painless. It was time to make the OH download and see if his experience was just as easy…. and…. it was! HUZZAH.

He was able to connect to me easily – always a plus. The application has a chat function which, honestly, for me, is pretty useless as we’re generally on permanent Skype. However, I’m aware that it may not be useless for everyone else, so this was the first thing we tested. We had a little play about with the messages, saw how quickly they’d be received (since we were also on Skype at the time) and played around a little with the photos. By ‘played around’ I mean: I sent him a picture of my tits to make him happy, because he’s complained that my messages via text just ‘weren’t sexy enough’. All of these functions worked really well; messages were sent and received with no effort at all.

It was then time to play with the vibrations, and this is where we also hit problems. By now we’d been playing with the application a good 20 minutes, the toy was connected and it hadn’t disconnected for either of us. However, when we started to actually use it, things went wrong.

So, with the issues at hand, we gave up. I was more than a little deflated as I was really hoping for more. I then proceeded to email Lovense in regards to the issues I had. And, this is where things began look up. Let me just say right now how impressed I am with Lovense. Seriously, I was incredibly impressed, and this is why:

I was emailed back and asked for details of both of our phones (my OH uses the One Plus One and I use the One Plus Two, both Android devices), screen shots and more details of the issues. He advised me that with problem 1 – that this wasn’t a problem with OH’s phone, it was, in fact, the way that the app was designed. He admitted that it was a bad design and informed me that an update for the app would be out later THAT DAY to rectify this issue. We weren’t quite sure why we had the disconnection problems, however, I’ve not had that problem since the app update (or it could also have been because of problem 3). Eddy advised me that problem 3 was because I had the first batch of toys. This model had a tendency to over-heat and, to stop them from overheating, they don’t stay on full power for over a certain amount of time. This is why the vibrations were going higher and lower when I complained to the OH. The newer model was then sent out to me so that I could have constant vibrations and provide a more accurate review.

So in testing, the OH and I had three issues when using this, and the three of those issues now seemed to be resolved.

Moving on to the newer model

The newer model (looking exactly the same) arrived and we put it to the test. The OH had been working a lot, so, when he was free, I didn’t want to spend my time with him pissing around with the application. I wanted to know what to expect and to test some of the initial problems that we had with it first, so that when the OH was home we could actually play – because: orgasms. So, I enlisted the help of my friend Reenie, during one of our Skype conversations. I said, “HEY! Reenie, would you like to control my vibrator?” Like you do. These are normal questions to ask friends right?! Reenie, like my OH, is also in Canada so the distance remained the same.

Reenie of course reveled in the idea, proceeded to download the app and create an account. This took, at most, three minutes. The problems we had were getting her to be able to connect, although I’d accepted her and we could chat to each other using the application, she didn’t have the controls to be able to control my vibe. We couldn’t figure out why. So we pissed around with the app for a little bit; closed it, opened it. She sent me screen shots. Eventually, I told her I was going to LOG OUT of the application, close the application then re-open it and log back in. She also did the same thing, and that seemed to do the trick. She was able to request permission to play with my vibrator. And play she did!

How did the newer model, the Lush 2 go?

The Lush, however, had different plans. No, it didn’t disconnect me from my partner, it disconnected the vibe from the app once.  It was a bit annoying but can be re-connected quickly.

Oh,  I forgot to mention:  my favorite part about the app! I can grant access! YES! My partner doesn’t have to constantly ask for permission to control my vibe. I can give him unlimited access and, so long as the vibrator is turned on and connected to the Bluetooth, he’s free to ‘turn me on’ any time he damn well chooses. Not having this function was one of my major annoyances of the We-Vibe 4 Plus. Good job, Lovense!  We tested it out with me going for a walk around the local park and him turning it on whenever he pleased.  It was magnificent and so naughty.  I loved a bit of public play.

Wrapping up my review of the Lovense Lush and Lush 2

I also think the company are pretty awesome. They make it quite clear on Reddit, in their app rating responses and via email that they’re dedicated in to making this work for YOU, the consumer. That’s something I really admire. I can’t wait to see what else they bring to the LDR table because, right now, they’re doing a great job.

8.6/10
The Lush sex toy can be purchased from the official Lovense site.  If you follow that previous link it goes to a page where the product might be on sale.

The other Lovense toy I have is the Hush butt plug.