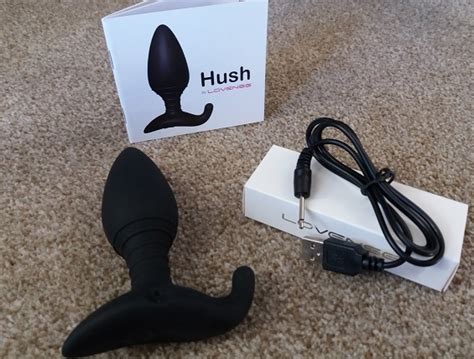 With Skype and FaceTiming, you never really feel too far away from your other half, even if you’re millions of miles away in some other country. Some couples even have dinner with their spouses while both eat a Dominos pizza with the same exact topping. This may not give them the same experience as being together, but it’s as good as it gets.

If there’s one thing you can’t be over the internet, it is intimate. However, that is quickly changing with the variety of sex toys in the market today. In this post, we’ll be reviewing the Lovense Hush that is pretty much made from scratch to suit folks in long distant relationships.

The Hush might be on sale at the moment – 2021, check out the official Lovense site.

What exactly is the Lovense Hush?

Lovense is well-known for create unique phone-controllable, bluetooth vibrators and anal toys, and the Lovense Hush is one of the most epic toys the world has even seen. The Hush butt plug is a smooth and extremely powerful vibrating butt plug. This all seems like anything a regular butt plug could do. But, the unique part of Hush is that it can be controlled by your partner sitting in another continent. Other controlled vibrators can only handle a few meters of this distance, but Hush can be controlled from pretty much anywhere. Now, you’re probably starting to see exactly why this toy is a marvel for the industry.  Lets face it, most are looking for remote controlled vibrators but our butts shouldn’t be left out of the fun.

Who is this Toy For?

Primarily, this toy is meant for couples with a long distant relationship, but that’s not the only way it can be used:

How To Use The Hush

Hush comes inside a pretty luxurious box with a velvety packaging. The packaging is pretty sleek, you definitely don’t expect a butt plug to be inside, more like a Rolex or something expensive. There’s a recharging cable, the butt plug and a user manual inside the box. The user manual will pretty much cover everything we will mention about using the device, so feel free to read through either.

So, basically, the first step is to install the Lovense app for the lavish device. You’re going to need a smartphone or an iOS device to use this butt plug. The app is pretty decent too with close to no bugs, so don’t worry about your device or the app freezing or anything during playtime.  The app is what allows you to use the Hush as a remote control butt plug.

Next step is to sync your device to the app. The process isn’t really that difficult, the app will walk you through it with step by step instruction so we don’t really need to go into that much detail to explain that. The third step is to connect to a partner. There’s a long distance tab on the app. Tap that to add your partner and enter an email. They will get an email with your request and they can follow the instructions in the email to carry on. This setting is a bit tiresome but don’t worry, it’s a one time thing only. After that, you will just connect right to your partner in just a couple of clicks.

Now that you know what the toy does and how it is used, let’s talk about a few of the pros and cons you should learn before you purchase the device.

Pros of the Hush

Cons for the Hush

While there aren’t too many things wrong with the Hush, there are a couple of things that the toy lacks in. Here are a few drawbacks of using the Hush from Lovense.

Is There A Better Alternative?

The Final Verdict for the hush

The flaws are minimal considering that a lot could have went wrong with this toy.  Overall, I’m really happy with it as it helps me explore my kinky side.  This toy isn’t too expensive and it certainly deserves some serious consideration if you’re thinking about purchasing toys. All things considered, it’s one of the best toys money can buy at the moment.

The Hush might be on sale at the moment – 2019, check out the official Lovense site.